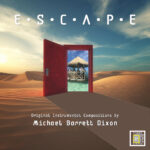 During much of 2020, I rummaged through 600+ original composition recordings in various formats (DAT, analog reel-to-reel, cassette) in the Dixon “Vault” for long-forgotten pieces suitable for release. In addition to music written for modern dance and a suite of contemporary jazz pieces, I realized there were quite a few electronic instrumentals created during my time in college, where I had access to vintage synthesizers and equipment. Over the course of several summer months, I selected, cleaned up and remastered 22 tracks (1 hour and 10 minutes) for an October 2020 release. These tracks were originally recorded between 1989 and 2008.

A large portion of these compositions were recorded during the last 3 years of my undergraduate college years (1990-92), where I had an explosion of inspiration thanks to access to the synthesizer studio at my alma mater (East Carolina University School of Music). Vintage synths used to create music of that time included the Mini Moog, Yamaha DX-100, Ensoniq EPS sampler, Sequential Circuits Prophet 600, Korg M1, Yamaha TX81Z, Korg Poly 61, Korg Poly 800, Korg Trinity, Korg 01/Wfd, Korg Triton, Korg DDD-1, Roland TR-909, Oberheim OB-Xa, and Roland D-50. Additionally, software instruments like Apple’s Garageband and Logic Pro X were also used in some of the more recent recordings in this collection. At least half of the recordings were restored from original analog 1/2-track reel-to-reel masters.

The album is sequenced in a particular order, but not chronologically. The first section (tracks 1-9) includes much more atmospheric and moody compositions using mostly vintage equipment. The second section (tracks 10-22) is more upbeat, soundtrack-like, and positive in tone, utilizing more modern instruments. Over the course of listening from start to finish, the music will begin to lighten up gradually from the early dark pieces.