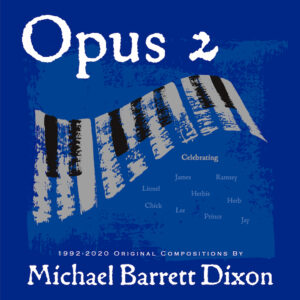 As a student recording engineer for live concerts at East Carolina University in the late 80s and 90s, I had recorded a ton of excellent jazz recitals/concerts, so that experience rubbed off in a positive way. So much so that in 1992, I composed a suite of instrumental jazz and funk-influenced tracks, recorded on a Korg 01/W workstation. Not knowing what to do with them, they were filed away on a floppy disk. Fast-forward to 2020. With lots of time staying at home as the world grappled with COVID-19, I went through the 600+ recordings in the Dixon “Vault” for long-forgotten recordings and found these 8 pieces. I also found “Moon”, a big band original with vocals that I recorded electronically on the same Korg hardware. I had cataloged these recordings under the “Op. 2” designation, as I did with most of my compositions during college. So it seemed fitting I’d use that as the album title.

The sequences on the Korg still played (yes, I still have that keyboard!) but some of the performances had errors, glitches and/or dated sounds. So I decided to go full-Frankenstein on them! I transferred portions of each work into my computer’s digital audio workstation (Logic Pro X). I then recorded some new parts to replace what I didn’t transfer. So what you’ll hear is my 2020 self performing with my 1992 self! All of the recordings have some of the 1992 original performances blended with performances from 2020. I then spent 2 months mastering the 9 tracks to ensure they had that 2020 polish.

The album is a mix of traditional, contemporary and modern jazz, funk and big band. At the time of their original creation, they were only titled with a number. But it was clear each track was inspired by a certain musician or performer, so I chose first names of those jazz/funk masters as the track titles for this release. This album released digitally worldwide on Friday, July 23, 2020 on Pandora, Spotify, Apple Music, iTunes, AmazonMP3, Google Play, Tidal, YouTube Music, and over 100 others. All music was written, performed and produced by Michael Barrett Dixon.