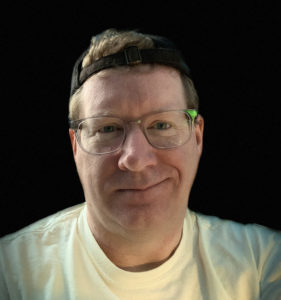 Michael’s official start as a composer/songwriter came in the summer of 1977, when he notated two instrumental piano works instead of practicing for his next piano lesson. He played those two pieces for his piano teacher. She encouraged his creativity and the spark was ignited. He was 11. Fast forward to the age of the Casiotone MT-70 keyboard and a cassette recorder he received on Christmas years later and there was no turning back. Rummaging through the many cassette “master” tapes in a box recently, he discovered that he had written/recorded well over 500 songs and instrumentals from 1977 to 1989 alone.

ECU hired him out of grad school to initially continue his work as recording engineer and provide faculty support with education technology. It’s also where he met his wife, Tracy. He spent the next 21 years at ECU, teaching various courses including an online popular music course he designed and serving under the dean of the College of Fine Arts & Communication as instructional designer/coordinator of technology & distance education. In 2011, he received a second masters degree, this time in instructional design/technology, also from ECU. In 2015, he took a position at the University of Richmond, returning to his home state of Virginia, serving as assistant director for UR’s Center for Teaching, Learning, and Technology. Michael is a realist: he knows making music for a living is very tough in the streaming age, so the “day job” keeps the bills paid while he toils away in the studio…working up new (hopefully) gems and hoping to attract label interest.

Michael did take a hiatus from creating music from 1999-2007, with a few exceptions when the need arose. During that time, he and his wife Tracy welcomed their daughter, Abigail. Abigail has even helped her dad write and record a few songs.

In 2008, Michael stumbled on the poetry of Sara Teasdale and was incredibly moved by her lyrical prose. He decided to pick 10 poems and set them in today’s electronic pop genre. The Teasdale project is a long-term project, so no release date is known.

In June 2016, Michael released a compilation album Songs Through Time, comprised of brand-new songs and remastered or re-recorded tracks from the past 20+ years.

In December 2017, he released the Christmas Lake EP, containing four original instrumentals with a touch of holiday spirit. On June 15, 2018, Michael released Issues, containing 11 tracks (most new, a couple previously unreleased songs re-envisioned). The album has a slightly more electronic and 80s nostalgic sound, touching on numerous genres as he is prone to do on albums.

A new new/soundtrack 5-track EP Aquarium was released in July 2019, based on a previously abandoned instrumental project in 1994. Ironically, the music created for this project was quite uplifting in tone, considering Michael’s full-time job had been eliminated during the period the music was being produced. Michael considered the project therapeutic, as it kept him in positive spirits while dealing with the arduous task of the job hunt.

In 2020, Michael released one single and three diverse albums. Almost Free was a single written one year too early, with hopes that COVID would subside soon. The album Opus 2 was a contemporary jazz release featuring several previously unreleased (and thus reimagined) compositions and a couple of new ones, all paying tribute to famous jazz musicians along with Prince, who often utilized jazz elements in his music. The album, Music for Modern Dance was a remastered curated compilation of music commissioned by choreographers dating back to the 1990s. Finally, the album ESCAPE was yet another compilation of some of his early electronic instrumental work, all performed on (now) vintage equipment. The recordings were remastered from their original analog reel-to-reel recordings. 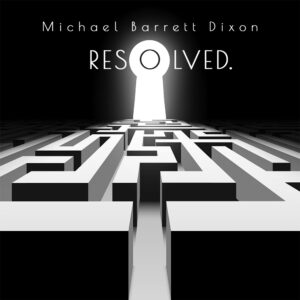 In July 2021, Michael completed work and released a new album of 11 all-new songs with an alternative, new wave sound. Entitled, Resolved., this is a follow-up to 2018’s Issues, and offers a lyrically more positive outlook on life as we emerge from COVID-19 and a politically rough four years.

Michael is mostly a studio composer, songwriter and producer (he does it all), but does itch to perform live as times allow.